Our annual conference, Writing True 14, was held in Toronto in early May. We had 112 attendees, three sold-out Master Classes with waiting lists for each, and 18 presenters, speakers, and workshop leaders who all arrived on time, in the right place, in spite of some wild Toronto weather!

We had many positive comments from those who completed our conference evaluation form. Standouts, in no particular order, were Dinty Moore, the conversation between Lee Maracle and Tanya Talaga, our First Page event (which one attendee described as a “master class in getting your first page read by an agent”), Kamal Al-Solaylee’s thought-provoking keynote address, Mandy Len Catron’s session on the essay, Betsy Warland’s master class on form, the conversation between Pauline LeBel and Waubgisheg Rice, and Lorri Neilsen-Glenn’s master class on “navigating rivers of connection.” A few also commented on our “helpful, gracious” volunteers. That would be the wonderful, hard-working Toronto conference committee!

We recorded two sessions this year – Kamal’s keynote address, and the conversation with Lee Maracle and Tanya Talaga. We’ll be posting these on our website soon, with access available to all CNFC members. 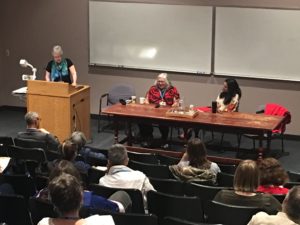 For me, there were some striking moments. Lee Maracle, in her conversation with Tanya Talaga, saying that if English is not your first language but you’re forced to use it, it’s as if you are cut in half – your head and body can’t communicate, you can’t feel what you’re saying. In that moment, I felt, as much as I understood, what that meant. Carol Off, telling us how the experience she describes in her book, All We Leave Behind, has changed her forever as a journalist and a human being. Tanya Talaga, describing how Stan Beardy, the Grand Chief of the Nishnabe Aski Nation, refused to answer her questions about Indigenous voting, but said, again and again, “why aren’t you writing about Jordan Wabasse? He’s been gone for 70 days.”

I’m sure many of you have your own moments that you will carry forward with you. Let us know, and we’ll share them in a future newsletter.

Thank-you to everyone who attended, to the many people who travelled to Toronto, to the new members who joined. We appreciate the support of every one of you.

We approved the Treasurer’s Report.

We will continue to move ahead with applying to become a National Arts Service Organization, which, if successful, will give us charitable tax status, with the ability to issue tax receipts for donations.

We discussed whether our membership fee of $50 per year should be increased. After some discussion, we voted to keep the annual fee the same, but to create a new designation of member called Sustaining Member. While details will appear soon, the idea is that anyone can become a Sustaining Member by voluntarily paying more than the annual membership fee, in effect making a donation to CNFC. The Board will need to decide how those funds will be used, but the intent at the AGM was to find a way to support members who otherwise might not be able to attend our AGM.

We talked about possibly connecting with other writing conferences, such as the Festival of Literary Diversity, or the Canadian Writer’s Summit, to mention a couple of examples, and decided that the Board would look into these possibilities. We discussed, but made no decision, about where to hold our conference next year. Much for the new Board to decide!

And the popular standing desk, generously donated again this year by Fitneff, was won by Pauline Le Bel.

If you have concerns, questions, suggestions, please let me or one of our Board members know. You can always contact us through this email address: info@creativenonfictioncollective.ca, or you can contact me directly at mcfarlane.judy@gmail.com

Thanks very much. Here’s to a great year for CNFC!